“Mountains are not stadiums where I satisfy my ambition to achieve, they are the cathedrals where I practice my religion.” — Anatoli Boukreev

Pick a mountain. Any mountain.

Life’s a beach. When tsunamis roll in there’s no option but to seek the rarefied air of higher ground.

At the moment I have bloggers block so bad I can’t even blog about why I can’t blog. So I’ve picked my mountain.

It’s one that takes a bit of preparation — an exercise regime, some attention to diet, that kind of thing. The idea is to keep focused on something bigger than the tsunamis. The actual climb is the easy bit. I’m no mountaineer. I never go further than base camp. This time there’s not even a base camp. I’m taking the scenic route.

So pick your mountain. Any mountain. And when you’ve climbed it, sit back and let go. That’s the hard part.

… one that takes a bit of preparation …

The main obstacle to self-publishing is the publicity. How do you hook people into reading your stuff? Way back in 2012 I was desperately trying all channels to publicize my book, Hillary’s Angel. An IT friend persistently told me to start a blog. Eventually, six months later, I did.

It was scary. Blogging didn’t come naturally at first, but one day I woke up with the realization that it had become a hobby — something I actually enjoyed. However, 18 months later I still have no way of knowing if it has helped sell any books. I tried unsuccessfully to get feedback from Amazon (at one stage there was a nifty chart on my Amazon author’s page, which sky-rocketed whenever I made a sale, but that was taken down for “upgrading” months ago and never replaced) and I’ve not had a whiff of a royalty from them to date.

The idea is (or, rather, MY idea is) that people who read my blog will think WOW I’d like to tuck into more stuff by this magnificent blogger and will then click on and download my Wonderful Book. Certainly I’ve really enjoyed several self-published books that I found on WordPress. Some great writing is not being published via the old-fashioned/conventional channels. In fact, it’s often better than the stuff in the bookstores (and a whole lot cheaper). But in my case I only have positive evidence that blogging has helped me sell one copy.

In another way (ie not sales related) I do have concrete proof that blogging has helped me publish. Early on it connected me with another first-time self-publisher who was far more blog-literate than I was and incredibly supportive with no prospect of financial reward (which still amazes me).

Indirectly, thanks to her encouragement, on 21 December I finally delivered another book. This time I published with Smashwords (following my blog-friend’s example) in ebook format only. This is SELF-PUBLISHING in the true sense of the word. Along with the (minimal) effort and the risks involved it has one major advantage: I can now tell exactly how many books I sell. This time around I’m not uploading to Amazon and I’m not asking folk to review me (if they do it will just be a bonus). So for me 2014 will be an honest experiment to see if blogging really DOES help self-publishers connect with readers.

That said, I can tell you what (in my experience) does NOT sell books. First and foremost, a book launch. Rubbish. I had a great party, but didn’t sell a single copy. In fact, if you asked my friends I don’t think they’d be able to tell you why we had the party in the first place. Secondly, book reviews. I had at least three four-star reviews but suspect I was the only one who read them. Next, bookshops. As a self-publisher I found it next to impossible to get bookstores to sell my books. (Another reason why I’m opting for ebook-format only this time round.) I sold three books at each of the two stores that very kindly put Hillary’s Angel on their shelves.

So what do I hope to achieve by the end of 2014 (apart from the obvious massive sales to all you supportive WordPress bloggers)? Well, firstly, I’m already deep into a Mills and Boone type romance (publish or perish) to be published anonymously. And secondly (and sadly) I’m thinking of awarding a special prize to my friends for the most inventive excuse for not buying my books. The list is growing daily. (And yep, that would be a book prize.)

On a more serious note, so far I’ve sold two whole copies of my new book Upside Down. Both to family, who bought them solely in an attempt to “cheer me up”. One was bought by my daughter, who doesn’t read books anyway, and one by my husband when he heard I’d reduced the price to $1. No, these are not tears of joy …

Tell us about a time when you felt out of place.
Photographers, artists, poets: show us CONFUSION. 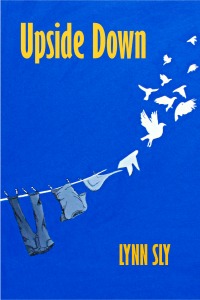 I wasn’t the only one to feel the confusion. Many people felt so out of place that they left the country. We all had mixed motives — those who stayed and those who left. No-one was motivated entirely by materialism or ideals, and sometimes it was simply a matter of survival. Some of us had no choice. We lived day to day, some hand to mouth. South Africa of the Apartheid years was a land of confusion alright.

My novel is an attempt to tell that story. It is set in a small South African town — a microcosm of the society as a whole as it lurched through a border war and liberation struggle. Today at least we are no longer confused. Our rainbow nation has been transformed by hope.

My book Upside Down is ready for publication on Smashwords. I have my cover, the editing’s done. But like this robin chat I can’t resist turning over a few more leaves just in case. The trouble is, there are so many layers to our lives. My book is fiction, but it is based on historical events. When is the research done? When is enough enough? My editor says the time has come. She even edited out some extraneous detail. I couldn’t agree more. But when someone sends an sms to say he’s got more to say … I’m tempted. And when I read another book, one that contradicts earlier facts … I wonder.

I’ve told myself that a work of fiction is just that. I am not obligated to get every detail right. My characters are allowed to be fallible too. Their opinions are not the last word. But still, I feel compelled to look, to dig beneath those layers of leaves and scrabble through the dirt.

On Thursday I met a gentleman with a handlebar moustache. He had no intention of shaving it off to begin a fresh growth for the international moustache growing month of Movember, but chatting to him gave me an idea for a story … and in the US of A this is also National Novel Writing Month…

November has thirty twenty-four hour days (believe me). So if I write one 300-word page an hour (and that’s on a good day) I must set aside five hours a day to write 50 000 words by the time you’ve all grown your moustaches and saved the planet. But where do I find a spare five hours a day during mulberry season? Even if I resist the temptation [crazy laughter] to make gallons of juice, jam and shortcake, the berries won’t rake themselves into neat little piles like they did in Camelot. So I guess I should join the National Blog Writing Month effort instead… 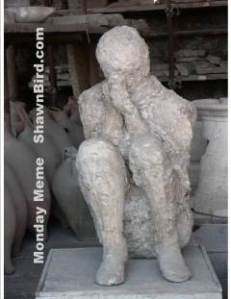 Long ago when I was young
I thought a dig would be great fun.
But now I’m not unearthing bones
just finding words and piecing poems
together. Though it’s not the same
as tracing history, finding fame,
not all the experts can restore
a single soul to Pompeii’s shore.
Yet these old words when set in place
might bring a smile to your face.

Is my cover blown?

On the verge of publishing an ebook, I am deciding on an image for my cover. I had this vision of exactly what I wanted. Until today.

Someone forwarded me an email about washing/clothes lines and it’s made me rethink. (See picture, if you are puzzled by this apparent anachronism of modern life.) Apparently washing lines have become redundant, just like typewriters, fountain pens that don’t use cartridges, diningrooms, handkerchiefs and Christmas cards. According to this email, people now prefer to use dryers, even in sunny South Africa. I must be the only person in the world who still spends evenings ironing in front of the TV. Perhaps next time I need a new iron they will be as difficult to find as bottled ink. Perhaps those clothes pegs they sell in supermarkets are only meant for closing bags of cereal and catfood, and not for hanging out clothes at all.

My book is set in the past, covering the period 1954 to 1994, during South Africa’s Apartheid years. It is called “Upside Down”, alluding to reports that interrogation officers at John Vorster Square dangled suspects upside down from a high window until they confessed, as well as the topsy-turvy state of society at that time.

What better image, I thought, than a washing line strung with paper dolls, black and white, to give the impression of the chaos and loss of control experienced by my characters. But now I’m having second thoughts. Even if washing lines were in use during the period covered by my book, what does it help to use one in my cover design if readers can’t relate to or, worse still, are puzzled by the image I hope to project?

The good news is that I think I’ve found the perfect designer to do the cover: She’s young and talented so I can trust her instincts. The bad news is that I still need to find the artwork and I’ve lost faith in my vision. Here’s the poem that did it:

A clothesline was a news forecast
To neighbours passing by,
There were no secrets you could keep
When clothes were hung to dry.
It also was a friendly link
For neighbours always knew
If company had stopped on by
To spend a night or two.

For then you’d see the “fancy sheets”
And towels upon the line;
You’d see the “company table cloths”
With intricate designs.
The line announced a baby’s birth
From folks who lived inside,
As brand new infant clothes were hung
So carefully with pride!

The ages of the children could
So readily be known,
By watching how the sizes changed
You’d know how much they’d grown!
It also told when illness struck
As extra sheets were hung;
Then nightclothes, and a bathrobe too,
Haphazardly were strung.

It also said, “On vacation now”
When lines hung limp and bare.
It told, “We’re back!” when full lines sagged
With not an inch to spare!
New folks in town were scorned upon
If wash was dingy and gray,
As neighbours carefully raised their brows
And looked the other way.

But clotheslines now are of the past
For dryers make work much less.
Now what goes on inside a home
Is anybody’s guess!
I really miss that way of life,
It was a friendly sign
When neighbours knew each other best…
By what hung on the line.